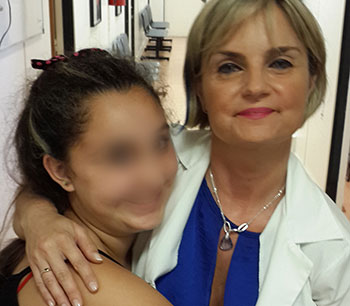 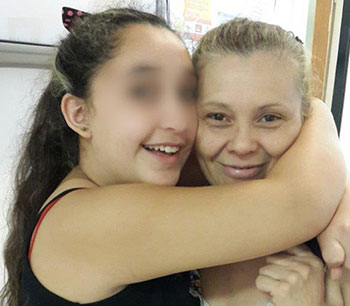 I have a patient, called Daniel L., with Huntington’s disease, who is in a delicate condition because he can no longer move by himself and has to be fed by means of a gastrostomy tube. Daniel has a daughter, called Brenda, 13 years old, also affected with the disease, which to date has expressed symptoms of Tourette’s Syndrome.

Unfortunately, Daniel’s wife (Brenda’s mother) decided to abandon them many years ago, when Daniel’s disease became manifest.
Both of them, Daniel and Brenda, are taken care of by Daniel’s sister. Her name is Norma and as you can imagine she is an amazing woman, taking care of her ailing mother, her brother and her niece affected by HD.

In this context, I decided to start arrangements for Norma to receive economic support, so that she could dedicate to see to her three ailing relatives more at ease, without going through so much economic hardship to feed them and purchase the medication they require. It’s worth pointing out that Norma takes very loving care of them, and they are always very clean, well dressed and fed.

The government decided to send a social worker to their home in order to determine the socio-environmental conditions in which they live, and to proceed to provide financial support.
However, to my utter disbelief, in her report the social worker decided that it would be best to transfer Brenda to an institution for minors, arguing that in this way the aunt will have to take care of one less person.

Aunt Norma fervently opposed such recommendation, and I  also presented a rejection in writing, making a request for the social worker’s report to be set aside.
Ignacio and I have decided to start a campaign to help Brenda through FACTOR-H, which is why we are telling this story. Brenda has the dream of having a room all of her own, given that she is currently sharing one with her grandmother and her father, both ill. She already dreams of a space where she could have her few dolls, and the photos of her idols; a place where she can listen and dance to her favorite music, forgetting at least for a while this terrible condition her whole family is enduring.

Fortunately, we are not alone. The people responsible for Fundación HD Lorena Scarafiocca have expressed their solidarity with this story, and decided to collaborate with us to help Brenda. They have decided to make a donation to start building her own room, but we still need materials and more economic resources.

If you are moved by this story and feel you can lend a hand, please do so by means of donating to: