Our first leg of the trip to see HD families took us to a place I had never been before. Choco is an area of Colombia bordering Panama on the North and the Amazonian region in the South. Choco has borders with both the Pacific and the Atlantic oceans, and is one of the wettest areas in the world. The rainforest and swelling rivers extend what seems like infinity. Choco is also one of the poorest regions of Colombia, and is populated mostly by native Indians and people of African descent. During the trip they told me that this region is so African because former slaves would hide here in the jungles as they escaped. The region is dotted with small villages of a few houses standing on stilts along the river. This area is poor and has been battered by guerrilla and narco conflicts for a very long time. As we landed in Choco from Bogota, immediately we felt we had arrived in a place significantly different from the rest of the Colombia we knew.

I was accompanied by Janeth Mosquera from AcolpEH (who was contacted by the HD families living there), Dara Mohammadi, a journalist from The Guardian newspaper from London, and by Sonia Moreno, a neuropsychologist from Medellin, who works at the University of Antioquia and who has helped many patients and their families in Medellin. Sonia is trying to put together the history of HD in this region, and she comes prepared with pencil and paper, trying to trace back the large family tree of the few patients we have identified. So far, we know there are 6 symptomatic patients in this general area, all from a large family. Turned out later that Sonia was able to find out the family probably arrived to Choco from Antioquia, explaining the descent of the disease across the region. By the end of the trip, we knew of new patients but we were unable this time to see them. 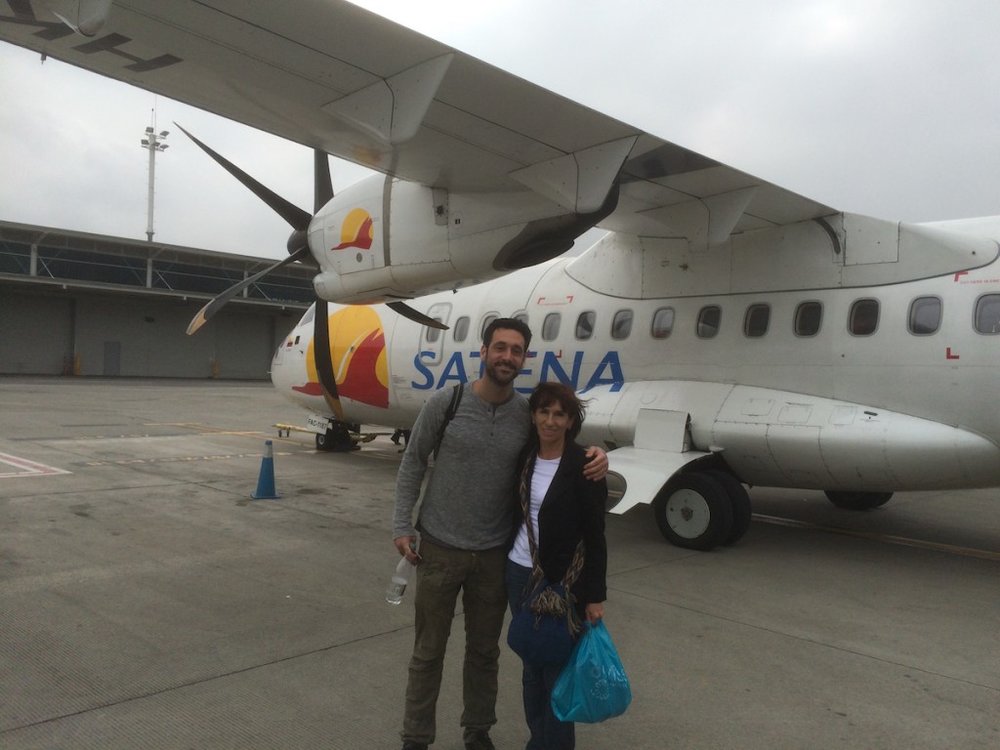 Dara Mohammadi is writing an article for The Guardian on the social and scientific aspects of HD. He is standing next to Janeth from AcolpEH, on our plane to Choco. The flight was delayed 3 hours because of the rain in Quibdo. In spite of getting to the airport at 5am – we did not leave until 9am.

How many other large HD families are here? How many abandoned people suffering slowly from the disease that the world does not know anything about?

The trip to Choco allowed me to know the family and the patients personally. We have been providing food for them this year, along with other things they need for their care, such as diapers, sheets, towels, etc. Soon we realized that no one other than ourselves had ever come to see them. The patients have been living with HD without any outside help, medical or otherwise. They are not medicated. They are isolated from the rest of the world, as it’s hard to transport them to see a medical center.

The capital of Choco is Quibdo, which is about a 3-hr boat ride in the river Atrato, one of the largest and fast-flowing rivers in South America. The ride to the town of Bojaya, whether some of the patients live, was an adventure. We were tightly packed along with two dozen people and spent three hours heading up the river, often times getting soaked in the rain, and going past small villages and houses on stilts along the river banks. The Army soldiers who patrol the river also stopped us. Standing with AK47s on their boat, it was hard not to be intimidated. We had given our names to the Army and police prior to arriving – as often times people can be kidnapped for ransoms. We did not encounter any problems but it’s easy to see how things can turn very complicated here. Access is impossible other than by boat or air – there are not many roads within the jungle. If something happens, it’s hard to make it to a city. These thoughts kept going through my mind as we visited the patients.

How do we get medical help here?

The view from the river – endless water and trees. 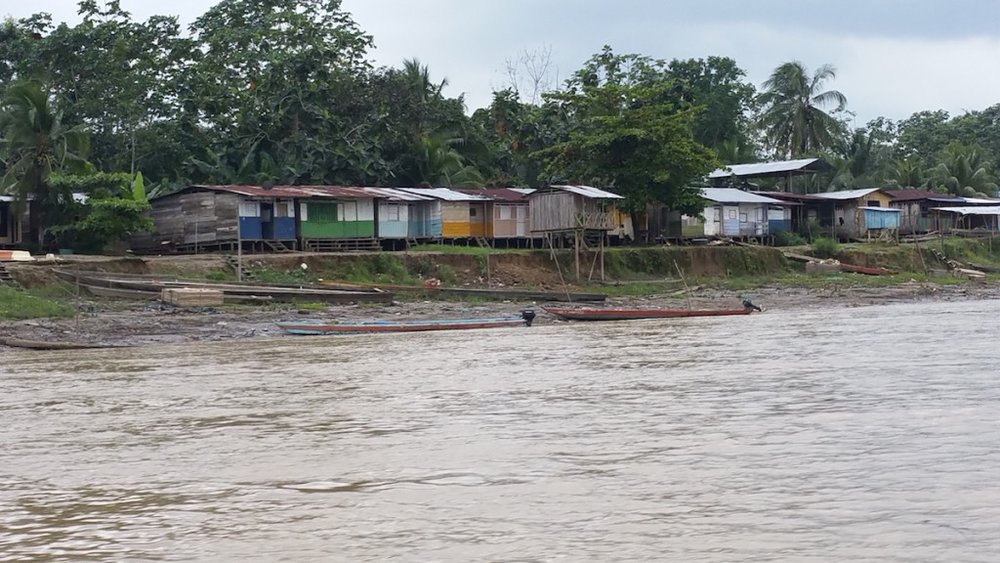 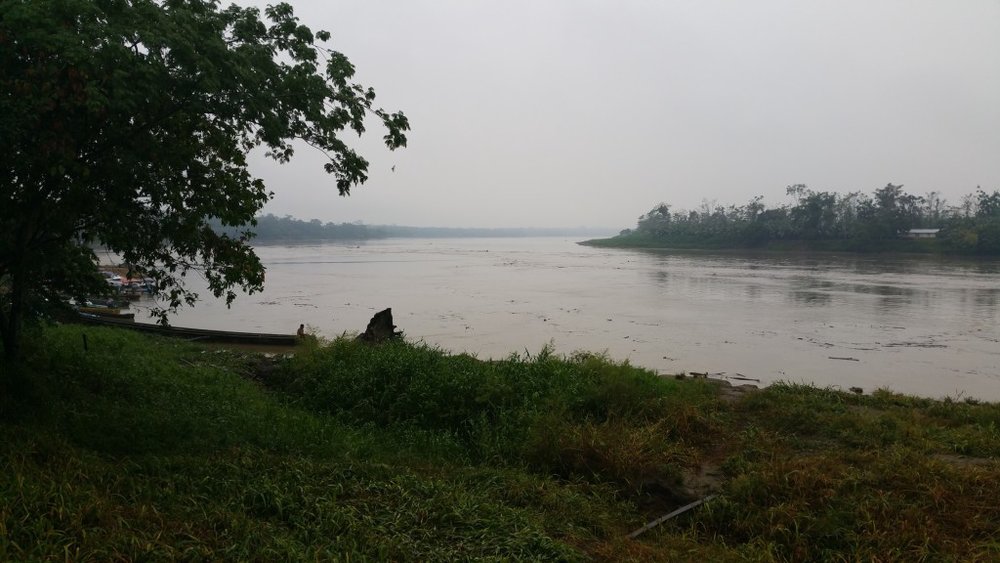 The small villages of painted houses – some decaying, some fallen on the river- that dot the landscape up the river Atrato to Bojaya, our destination. 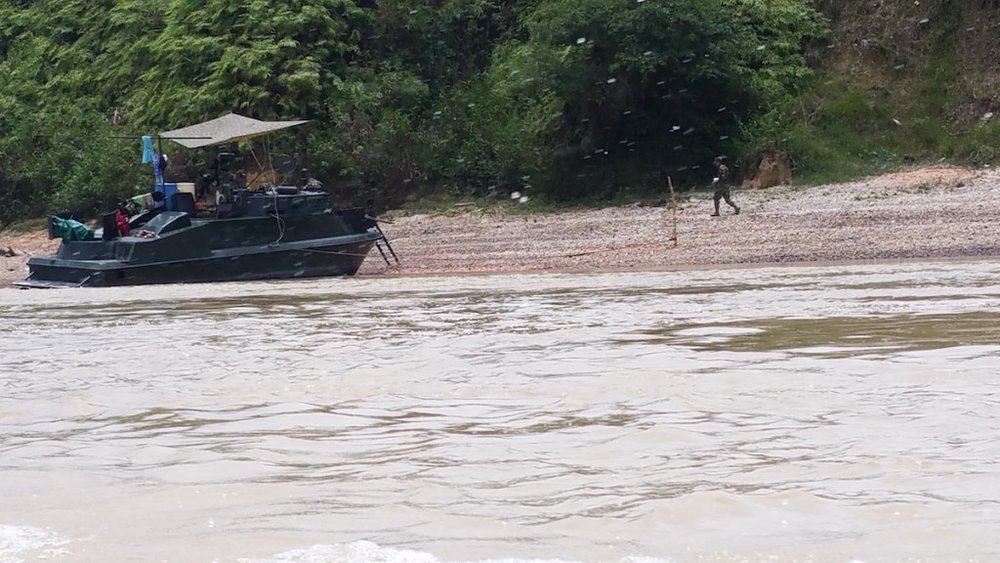 The Army boat. Standing above us with AK47s, the young men of the military looked menacing. They told us is good news to see them as they keep the river safe.

After 3 hours on the boat and pretty wet from the rain and the river, we arrived at our destination – the town of Bojaya. Children were swimming in the river, their mothers washing the clothes alongside, and the men working by bringing bananas and other fruits into the town. Our hotel – the ‘hotel Dubai’- was built a few years back by the previous major of the town. It was strange to find a little hotel (8 rooms) in the middle of this place. The lights went off in the entire town around 6pm.  People looked at us incredulous that we were there – the kids as they went to play football would smile. We ate fried plantains, chicken or fish from the river at the only restaurant in town for every meal. 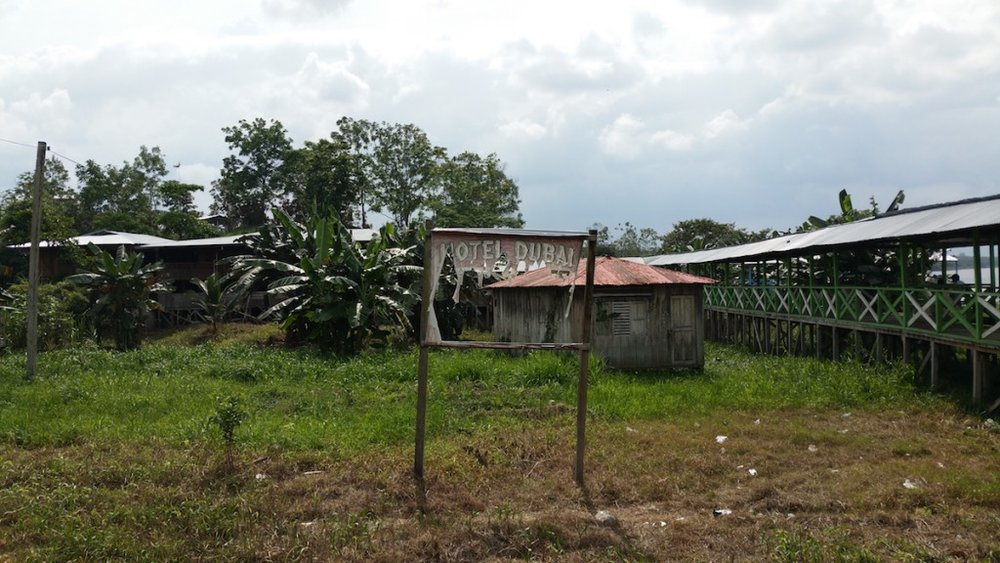 Our hotel – the hotel Dubai. Thankfully with the 96% deet mosquito spray we did not get bitten. This area is endemic for malaria, dengue, yellow fever and Zika. Hot and wet, it’s a perfect climate for mosquitoes. On our way back to Quibdo, we run into a mother and child sick with malaria. She did not look good. I gave her a pink stuffed panther – she smiled and I took her with me to give her mother a rest. These moments will be with me forever. 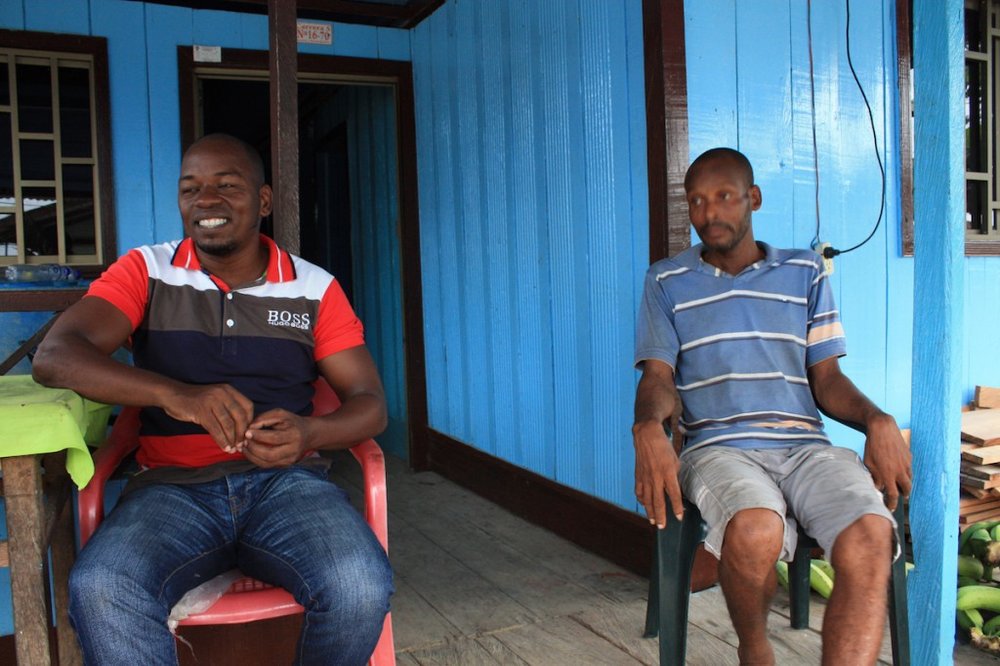 One of the patients living with HD, with his cousin who organized our trip.  What a wonderful family. We brought them a donation and spoke to them. The patient wanted us to see his house, down the street, as he still lives alone. He was always smiling and could converse well. 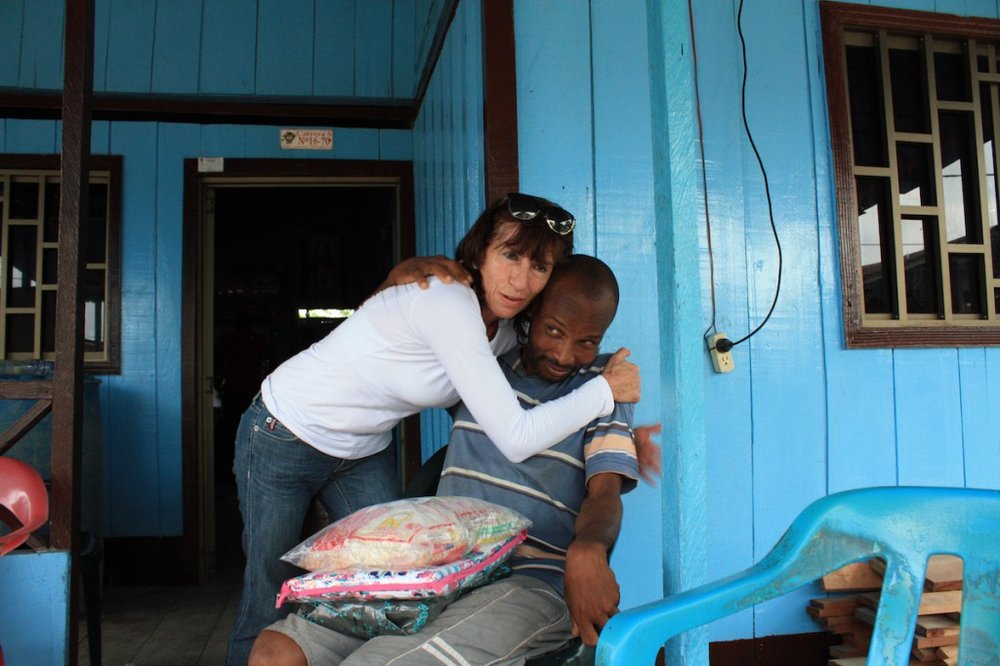 Janeth giving him our donation – sheets, towels, food, and care! We will be back – they wont be forgotten. 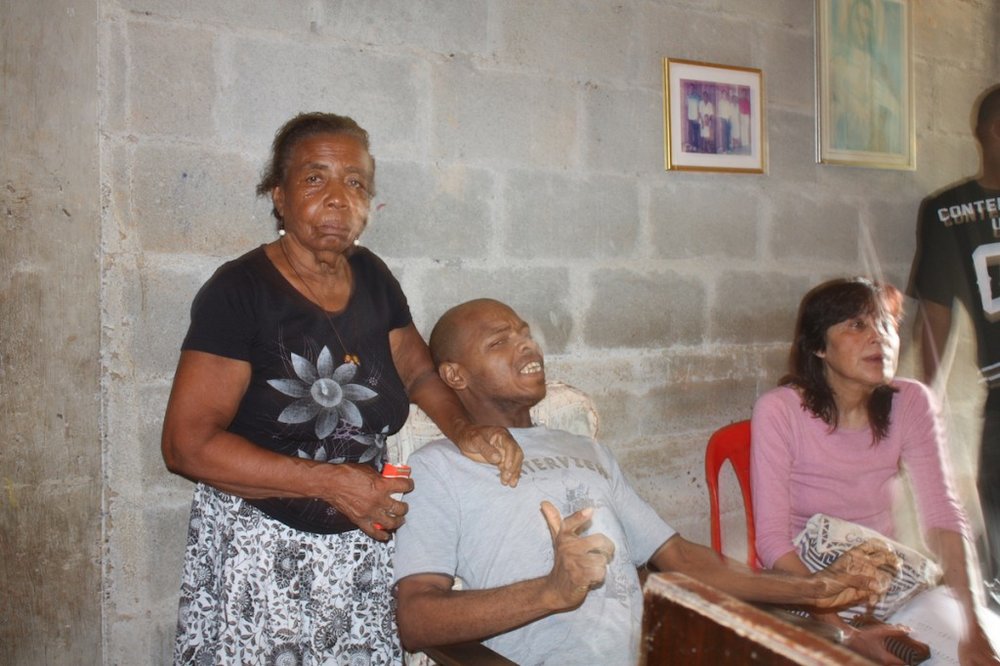 Second patient with his mother. Her husband died of HD as well. He has been symptomatic for 14 years, and his movements were terrible. He does not have medication. His younger sister is beginning to show symptoms. The mum complained that she cannot longer lift him and bathing him has become nearly impossible. They need help.

After we visited the families, Sonia agreed to have someone from Medellin come to Quibdo to look at the patients, as some of them won’t be able to fly to the hospital. The local hospital in Quibdo does not have a neurologist, so accessing the medication will be hard unless they can travel to Medellin or someone can come to see them. Without a neurologist prescribing the medication, they won’t have access to them. We need to think of ways to ensure we can provide assistance.

After about 2 hours in Bojaya, we had to come back to Quibdo to see more families and to fly out to Bogota. The ride back was eventful – the engine broke down in the middle of the river and we ended up stranded for more than 2 hours in a small village, until we were picked up again by another boat. Altogether the ride took over 6 hours – so we had to go directly to the airport to catch our flight. We missed the opportunity to see the other families in Quibdo, but we will be back! Overall, it was an experience we will not forget. 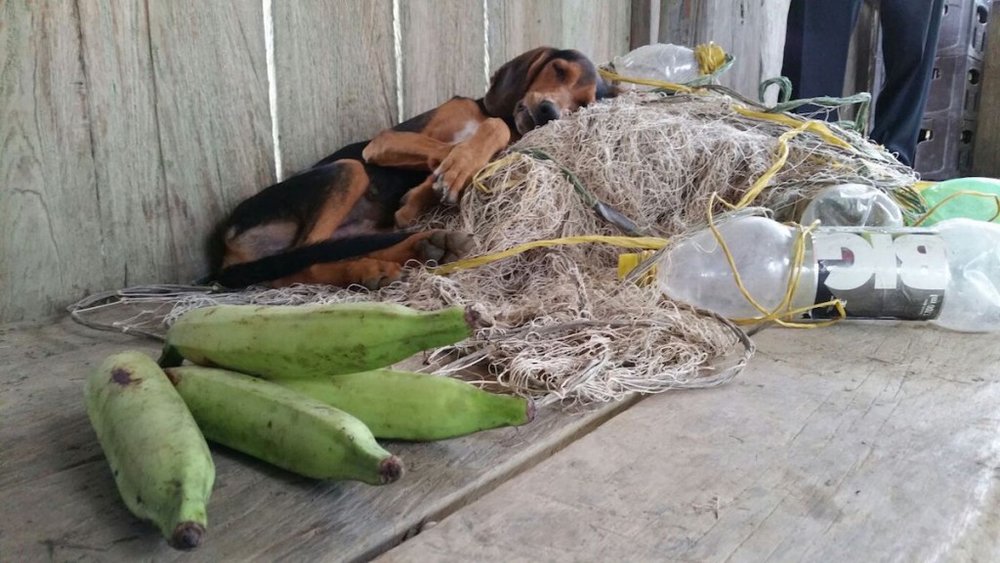 Life is tough in this part of the world!! 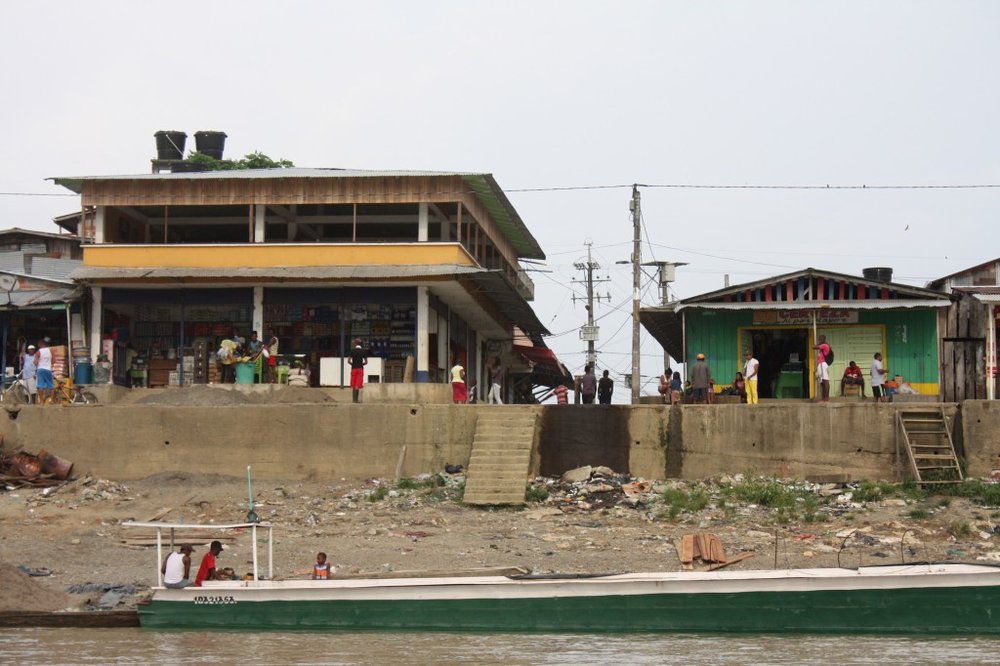 The town of Bojaya – we visited a family here. The town has received money recently after 100 people were murdered in a church by the guerrillas a few years ago. The government is giving back to the people they failed to protect by improving the town. 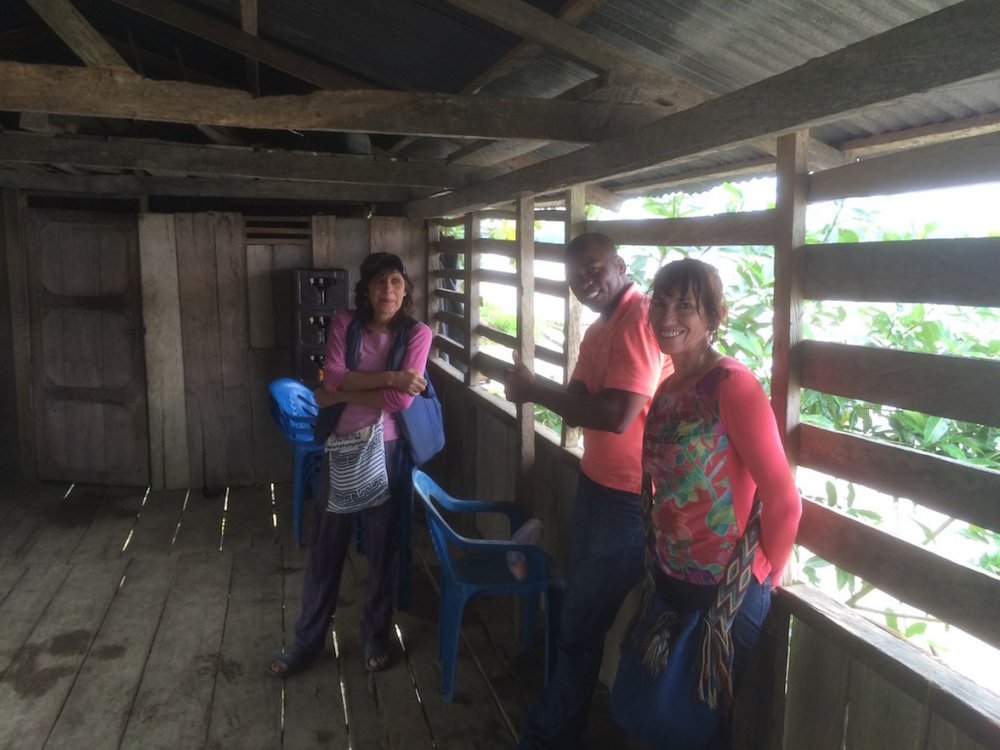 Sonia, Janeth and our guide/friend stranded after our boat engine broke down. We spent 2.5 hours waiting to be picked up and taken back to Quibdo. Because of this, we could not meet 2 additional families, as we were late for the flight back to Bogota to continue our trip.